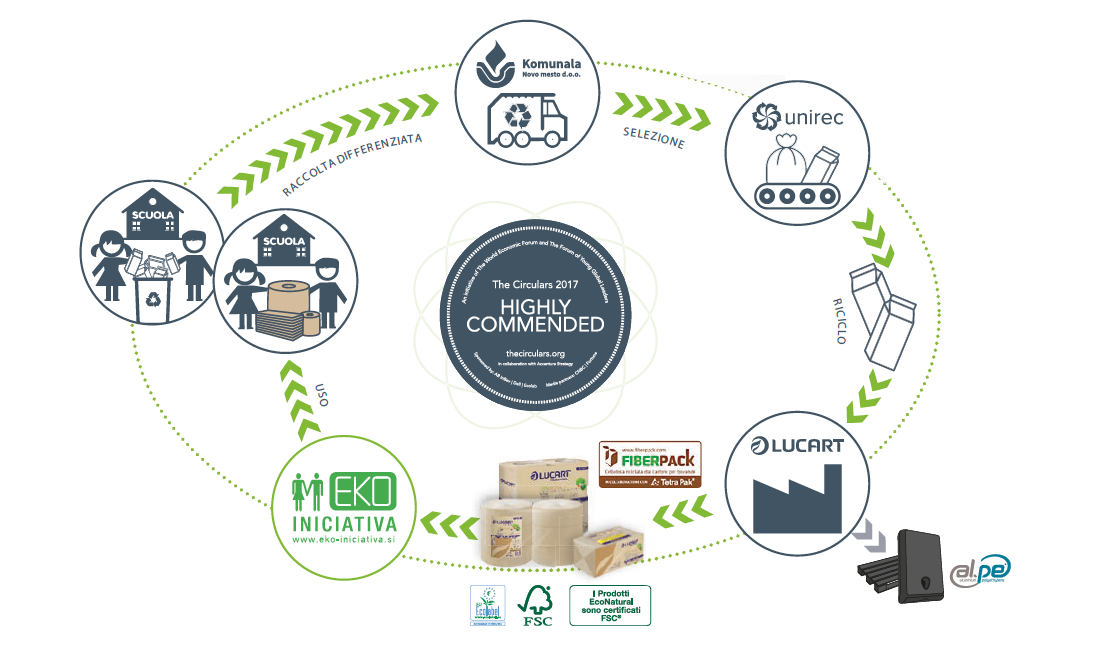 The pilot project in Slovenia, in the urban area of Novo Mesto, that was kicked off in 2015 has now become a successful case history as an example of the introduction of a circular economy system based on the recycling of Tetra Pak® type beverage cartons.

The "Municipal material flow cycle of Beverage Cartons - Novo Mesto" project was created to develop a durable and internationally replicable circular economy system in the urban area of Novo Mesto through the recovery and transformation of beverage cartons into new toilet and sanitary paper products for use in municipal facilities and schools of the town.

The project involved 14 local educational institutions and several partners, including Komunala Novo Mesto, a public company consisting of eight municipalities located in the Novo Mesto area active in municipal waste management services, Unirec, the second-largest packaging waste management company in Slovenia, Eko Iniciativa, a Slovenian community of companies and institutions involved in the supply of toilet and sanitary paper produced with respect for the environment, and Valtex, a Slovenian company active since 1993 in the sale of hygiene products and services.

Truly significant results were achieved as a result of the involvement and awareness-raising activities. Children from schools participating in the initiative were shown how to recycle beverage cartons correctly, to be taken to school four times within two months and at the end of the project the most successful class was selected. This built a strong awareness of the importance of waste sorting that led to repeating the project in the spring of 2016 with the involvement of five other schools in Novo Mesto.

In April 2016, on the occasion of "World Earth Day", the winning classes were announced among the schools participating in the project (some 14 classes for a total of 300 schoolchildren). The prize offered by the Eko Iniciativa community was a trip to Ljubljana Zoo. All the beverage cartons collected were handed over to Lucart since June for the start of the treatment of the materials which, according to innovative recycling technologies, have been reused as second raw materials for the production of paper for toilet and sanitary use, ready to be used within the municipal facilities of Novo Mesto, as institutions and shopping centres that are part of the "Eko Iniciativa" community, in addition to the schools involved in the project.
In September 2016 the project entered "The Circulars 2017" international competition, organised by the Young Global Leaders Circular Economy Taskforce and received a special mention in November as "Highly Commended Entry" in the "Circular Economy Government, Cities and Regions" category.

With this project we have gone one step further than just starting to recycle beverage cartons. It was an opportunity to building a real awareness of the environmental and economic benefits of waste sorting, creating value for the local economy while fully respecting the environment. Today, more than 50% of the public facilities in Novo Mesto use toilet paper made from beverage cartons and will continue to do so in the future. The project has also been replicated in eight other Slovenian municipalities, including the capital Ljubljana.